*This Cherry Berry Fool with Honey Lavender Shortbread Cookies is gluten-free, grain-free, refined sugar-free, egg-free, and is the perfect light dessert for using those summer berries. 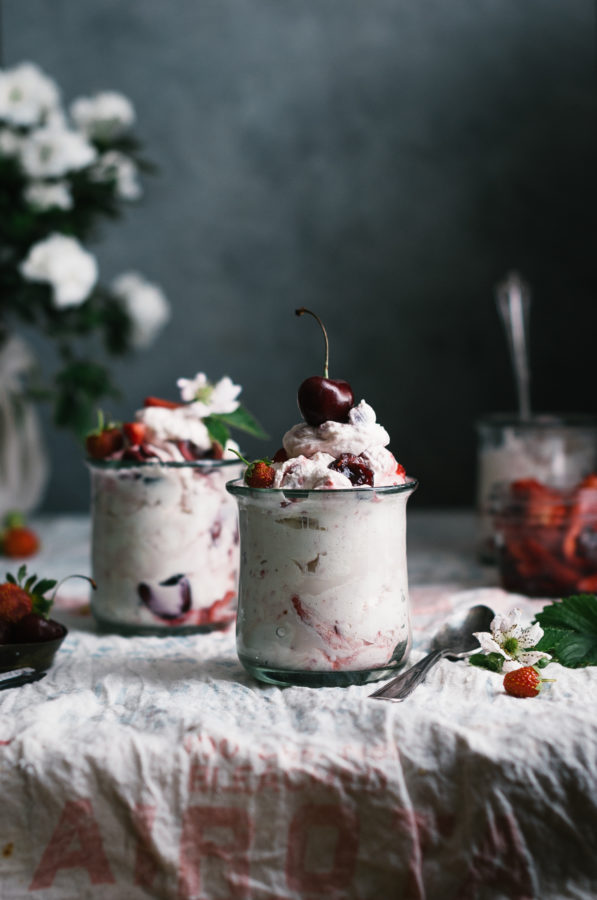 Summer has hit us hard here at the McCabe residence. We managed to survive the weekend of the 4th only to wake up this morning to the start of a 2 week long swim lesson stint. You may think that swim lessons sound like no biggie, but such is not the case for our crowd. Removing your 3 oldest sleeping Krakens from their dens and timidly nudging them into their swimming suits is not only a terrifying task, but an incredibly trying one, at that. Staying up super late to watch fireworks several nights in a row results in astonishingly recalcitrant children.

Lesson learned. Next year we’ll just do sparklers around 7:30 pm and then hit the sack. Too dramatic of a pull-back? HA. After dragging all four of the kids down into town, I managed to get the two oldest into their classes with little trouble. Ten minutes later, after much searching, we found my 4 year old’s class. To say she did not want to go would be a gross understatement. The claws came out, teeth gnashed, and I don’t think it would be an over-exaggeration to say there was blood in the water. It was awful. They sent out another instructor just to deal with her. She eventually calmed down enough that the 200 or so other students, teachers, and parents may be able to regain their hearing at some point.  My one year old, apparently, is a baby trout who has been unceremoniously ripped from his watery home and spent the duration of the lessons doing everything in his power to get into the pool.

Sleep is important and swim lessons can be hard. That’s the moral of this summer. So lets move on to something that is not hard: These Cherry Berry Fools. 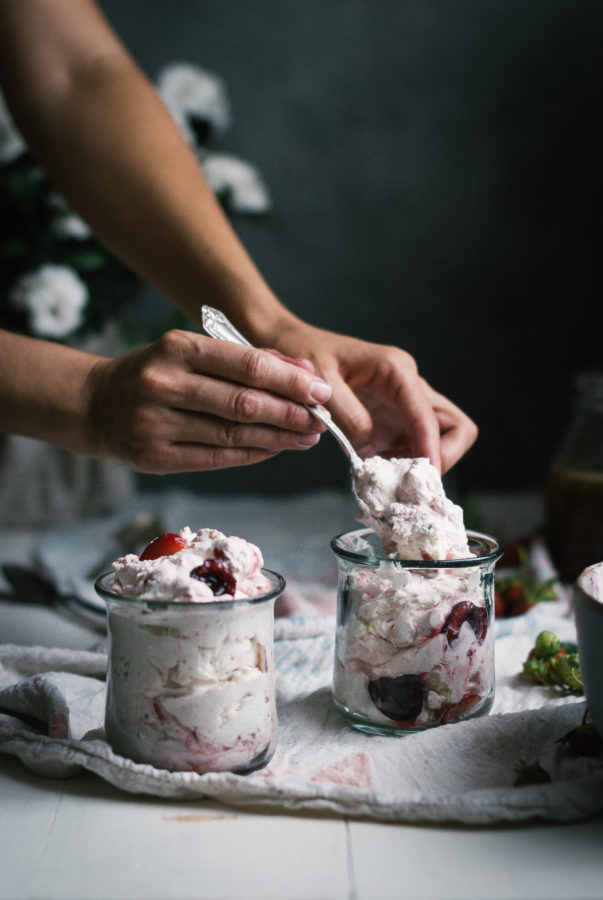 Fool’s are an old English dessert that consist of stewed, pureed fruits that are folded into a sweet custard. The modern version of a fool is even simpler: pureed fruit folded into whipped cream. When I was little I loved making fools for my family because they were incredibly simple to assemble, involved few ingredients, and were pretty to look at. Also, I found the name to be ridiculously entertaining.

This version of a fool is perfect for the end of a hot Summer’s day. Seasonal fruit folded into thick, cold cream is a July evening’s dream. I used fresh cherries and strawberries, pitted the cherries, halved the fruit, and drizzled it in honey. I only puree half of the fruit mixture so that when you fold it into the whipped cream, you’re left with large pieces of berries that look so very pretty when spooned into glass containers.

I serve the fool with little almond honey shortbread cookies that are scented with lavender. Don’t worry about serving these desserts with spoons, the cookies make a perfect edible scoop! 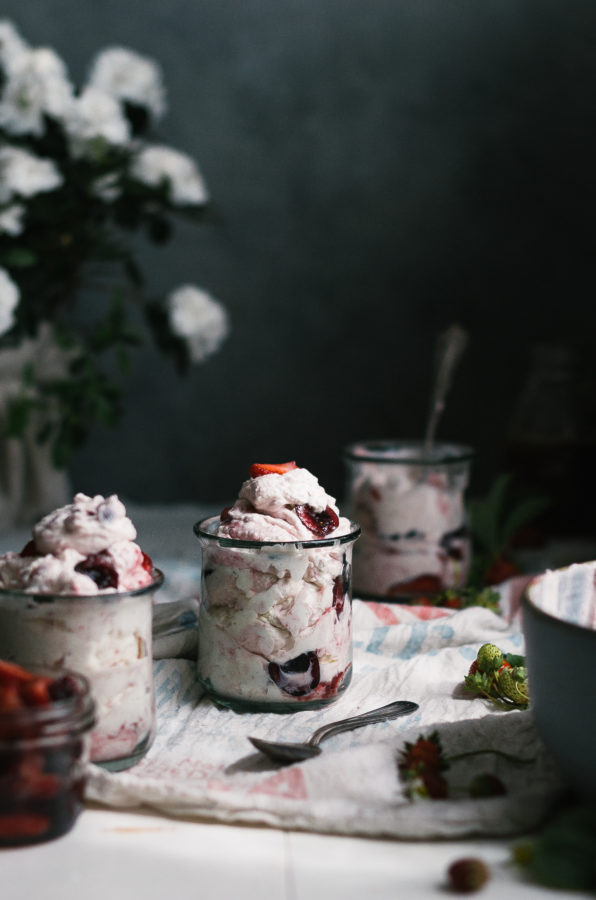 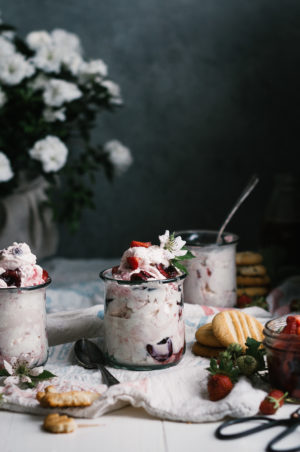 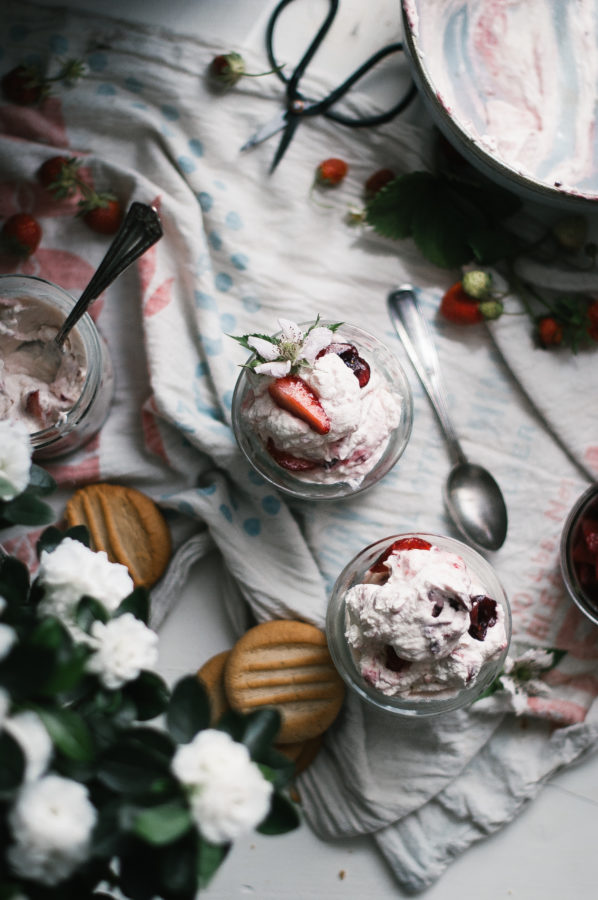 In the market for a few more Summer-y, berry-filled desserts? 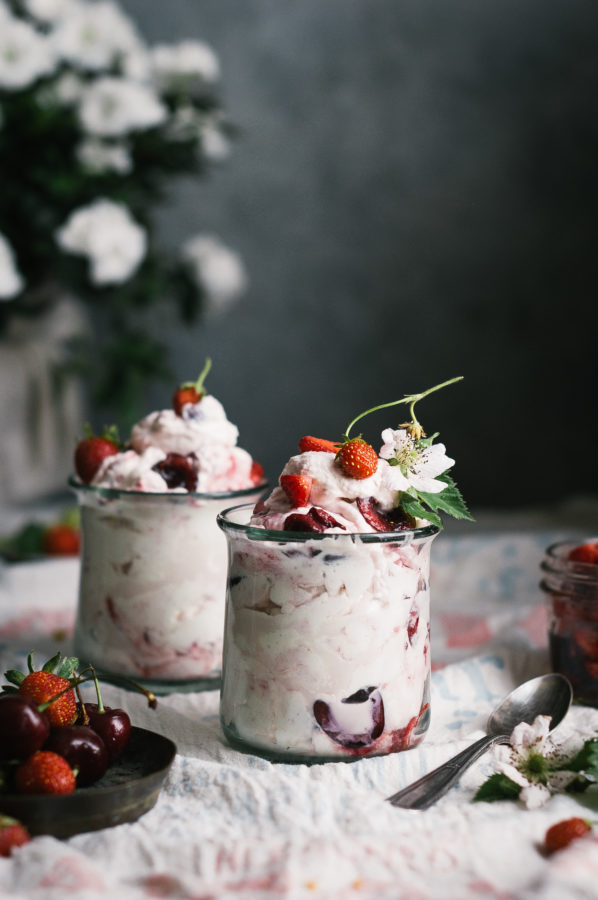 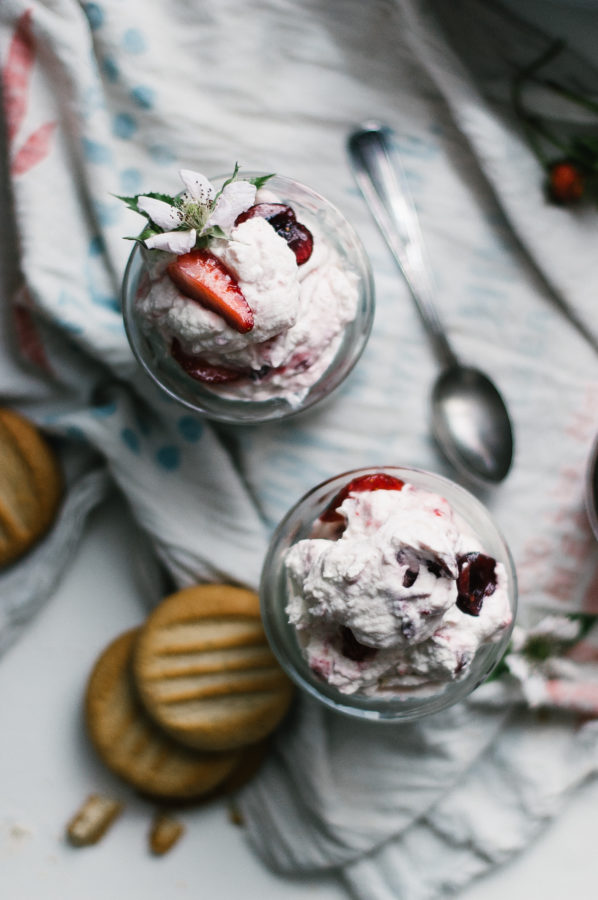 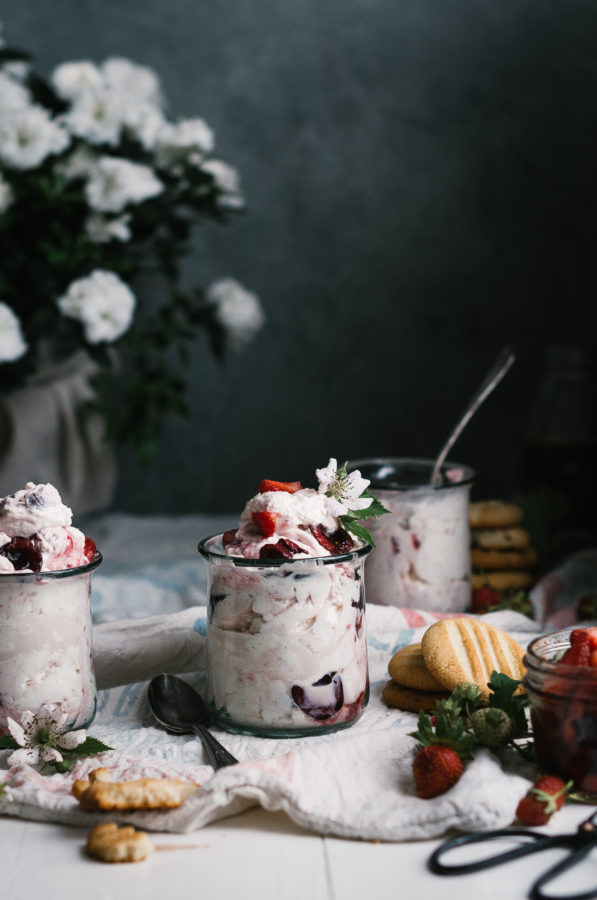 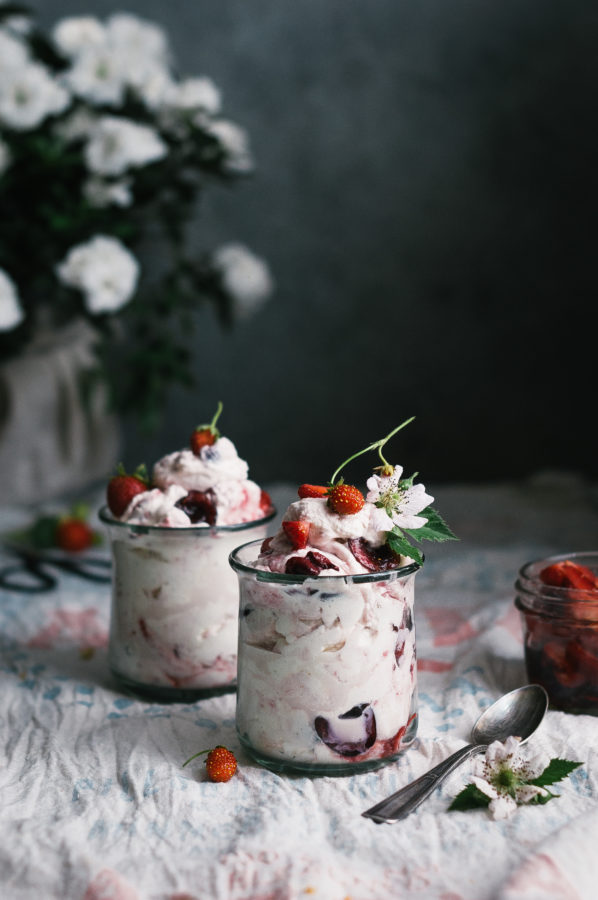 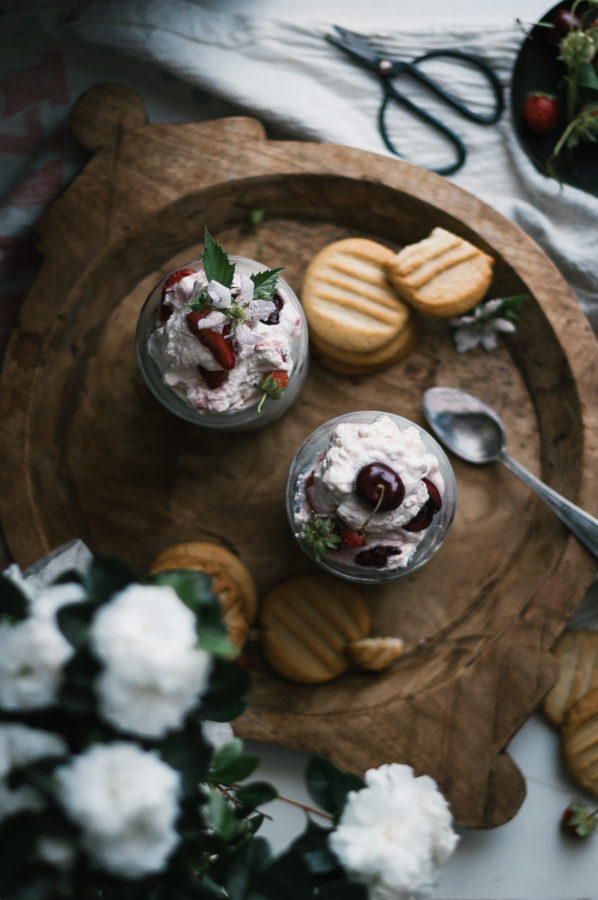 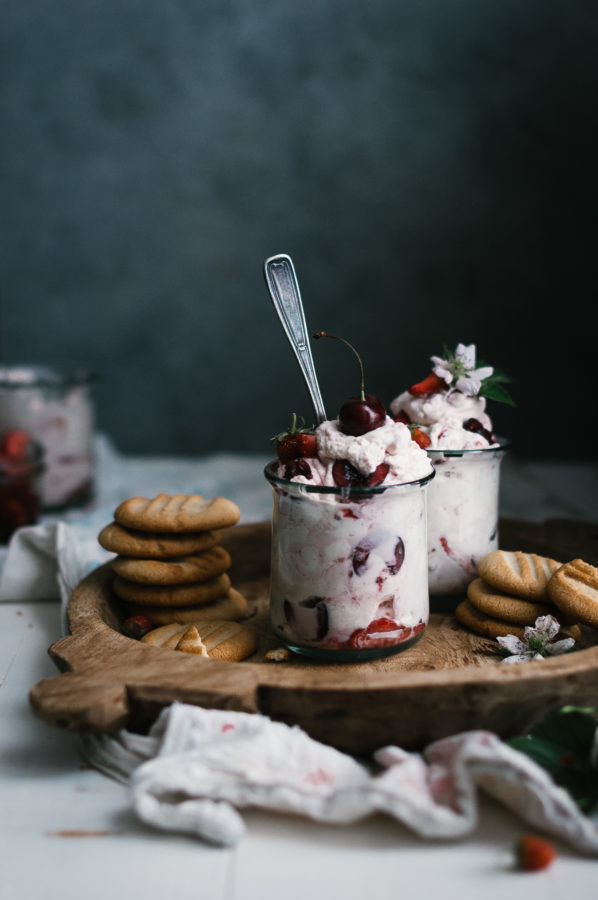