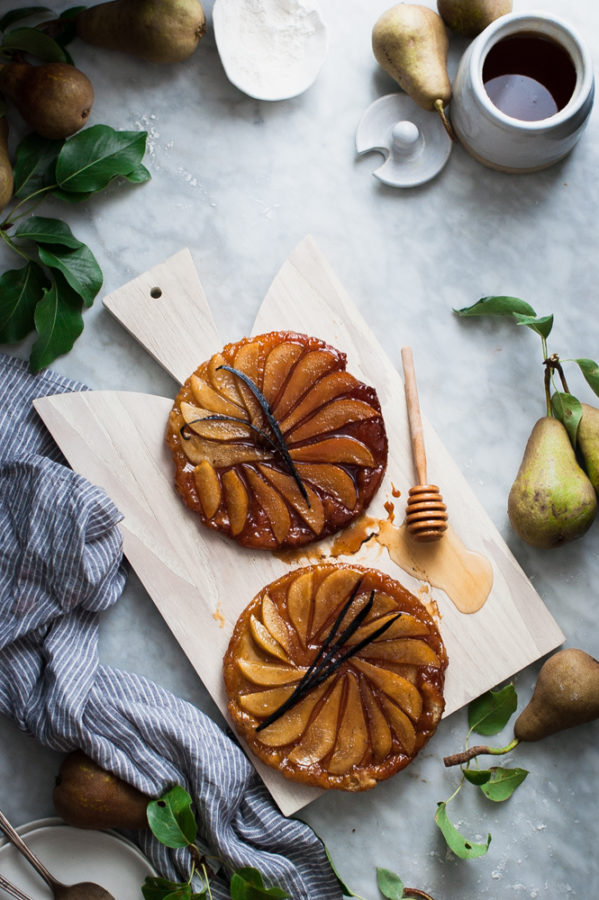 It’s a good thing October is one of my favorite months of the year, because this one is trying to do me in. And it’s probably also good thing that I turned down a cookbook deal I was offered last month (I know, I’m crazy). Preeeety sure I could not hack that right now. Life has been scheduled in pretty tightly and I’m just hanging on for dear life at the moment. For example: I said I would share these last week. And I didn’t. I didn’t lie, per se, I just had hope that I would squeeze it in somewhere in the wee hours of the night.

Which did not happen. I decided to sleep instead. My will to burn the midnight oil has weakened since I passed age 30.

So. October might be busy, but you can bet that I am trying to enjoy every magical little thing it has to offer, like white & green pumpkins, steamy hot drinks, ankle boots, soft, slouchy sweaters, and all the gorgeous pears. I’m lucky enough to be able to open my back door and pluck Bosc pears right from the branches of the tree that hovers over the roof.

With oodles of crisp, ripe pears just waiting to be transformed, I knew a tarte tatin was in order. I’ve been “tarte tatin-ing” all the fruit ever since I discovered homemade puff pastry about a month ago. I think a tarte tatin is one of the most simple and elegant desserts ever to be invented. This version involves, soft, perfectly baked pear slices coated in a sweet/salty honey caramel, studded with vanilla beans, laying on a sturdy foundation of flaky, buttery puff pastry. Serve it warm with a little vanilla ice cream for a dessert you won’t soon forget.

*If you do not want to make your own puff pastry, frozen store-bought puff pastry will work as well. BUT, I would maybe give the homemade version a try. You might be surprised at how incredibly easy it is to make! And if I’m being honest with you, store bought puff pastry has nothing on homemade. It’s been a game changer for me. There really is nothing like it! If you have 15 minutes, butter, and flour, you have puff pastry.

*The recipe gives instructions for making one, 12″ round tarte tatin. If you want to make smaller tarte tatins, like the one’s pictures, simply divide the syrup making into 3-4 separate mini cast iron skillets and top with puff pastry rounds that are 1/2″ larger in diameter than the skillet. If you don’t have small skillets, you can use smaller molds. Make the syrup in one pan, then divide it among the molds and proceed with the recipe (make sure, again, to cut your puff pastry rounds to size).

*Pears aren’t your thing? You can use almost any fruit you like. Apples would be wonderful here, as would quince or persimmons.

*Take care not to caramelize your syrup while cooking it on the stove top. It will caramelize while baking in the oven and if it gets dark on the stove top it will definitely taste burnt. Honey burns easily and you do not want that flavor in your dessert, trust me. 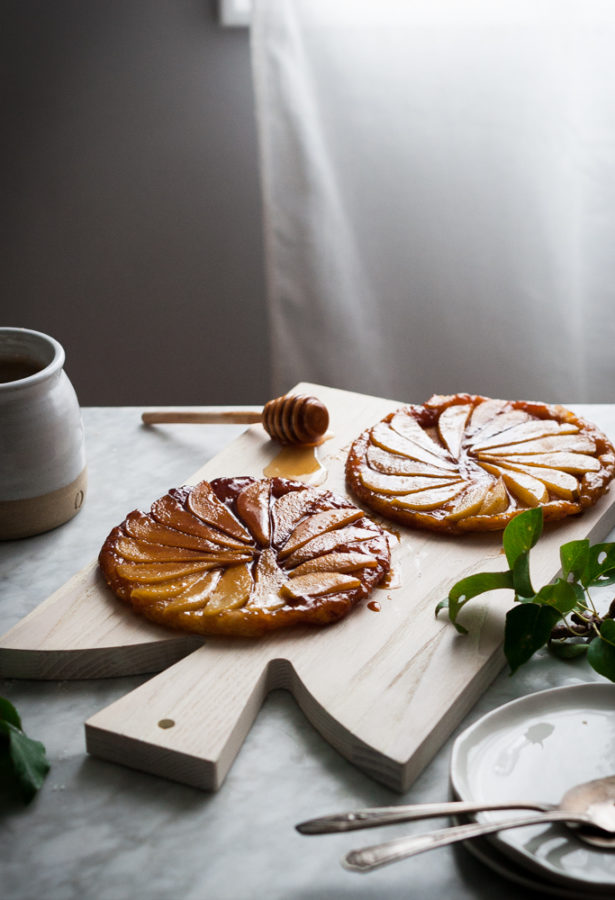 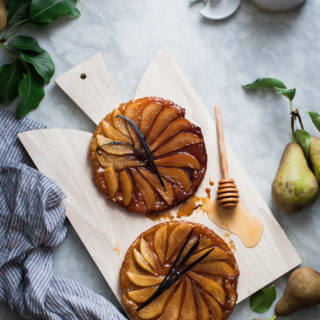 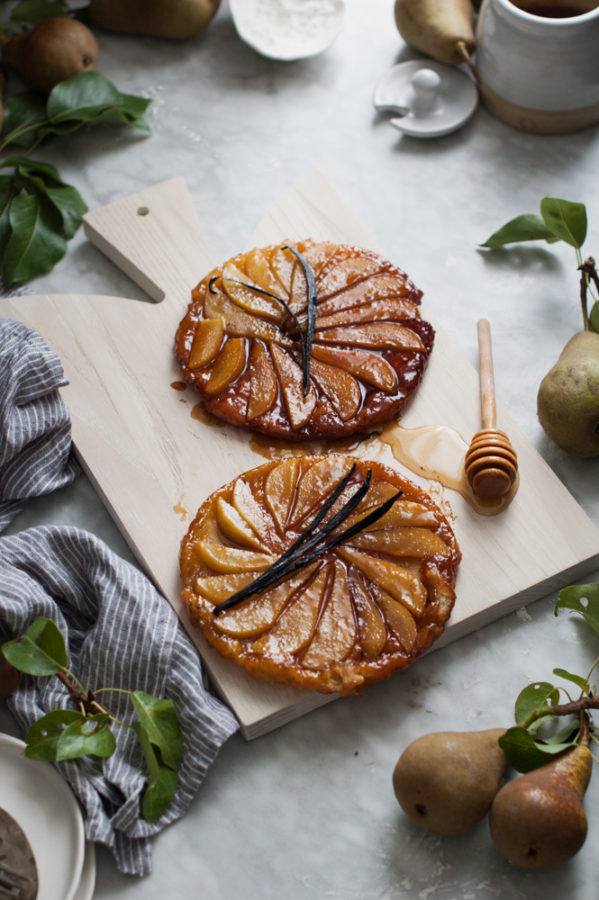 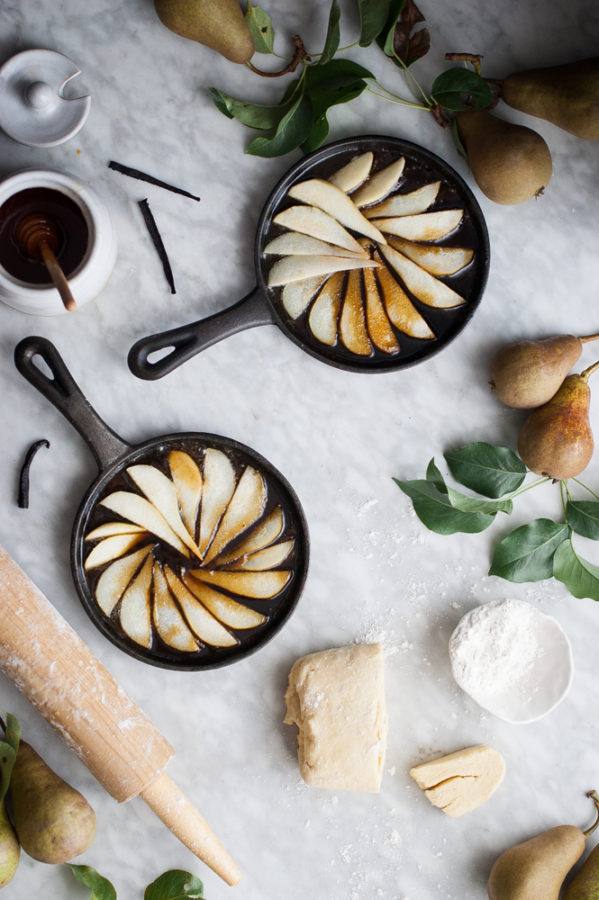 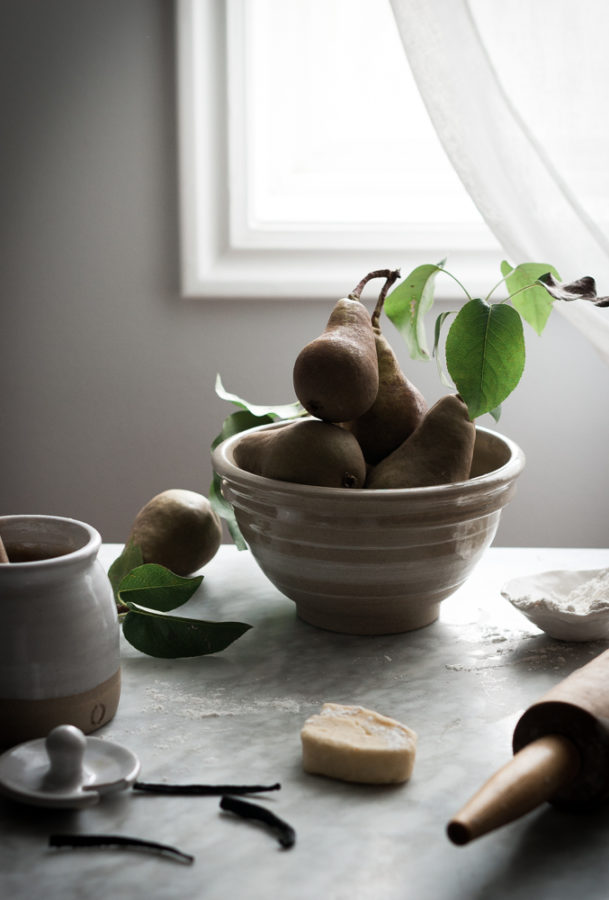