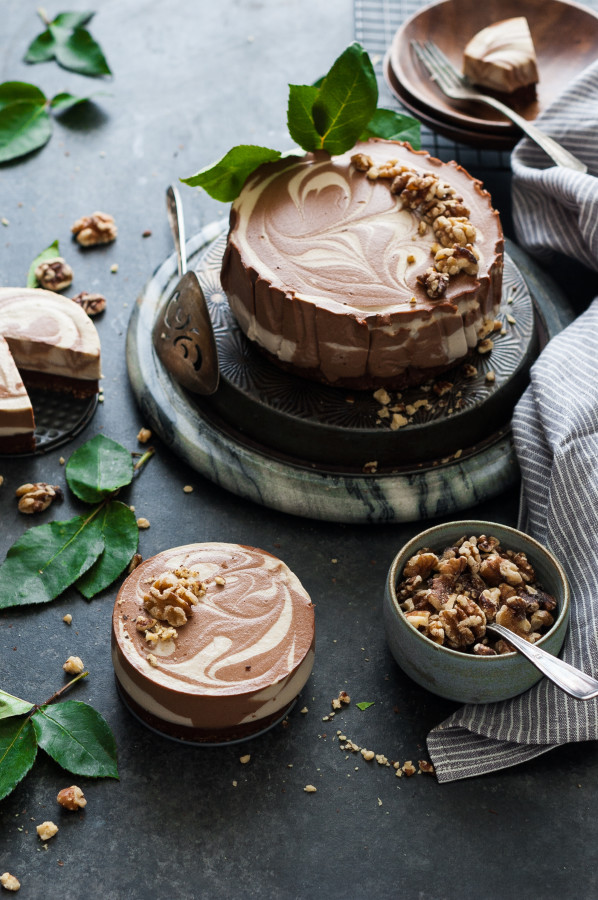 For as long as I can remember, Sunday’s have been a day for big family dinners. Growing up, my Dad would whip up an herb crusted roast, mashed potatoes & gravy, carrots with browned sugar, and butter soaked kernels of corn. I, being the oldest (of 7!) made the dessert, which would usually be a sugary cake of sorts. My Grandparents would come over and my Grandmother (who had MS) would let us ride around in her motorized scooter.

Now, life has changed in so many ways. We’ve all moved to different places, siblings have married, our lifestyles and diets have changed, and I find myself running around chasing after four children of my own. But the one thing that has remained a constant are Sunday dinners. My grandmother has passed on now, but my Grandpa still makes his way over each week, as do several of my siblings with their spouses and children. My Dad still cooks the meal each week, but now it consists of some sort of fish (usually salmon), and a wide variety of vegetables (the green beans sauteed with bell peppers are my favorite).

And I still bring dessert. Every week.

But even my desserts have changed. No longer refined sugar-laden or vegetable oil-soaked. Plant-based foods and desserts have made themselves a permanent part of our diet and I wouldn’t have it any other way. 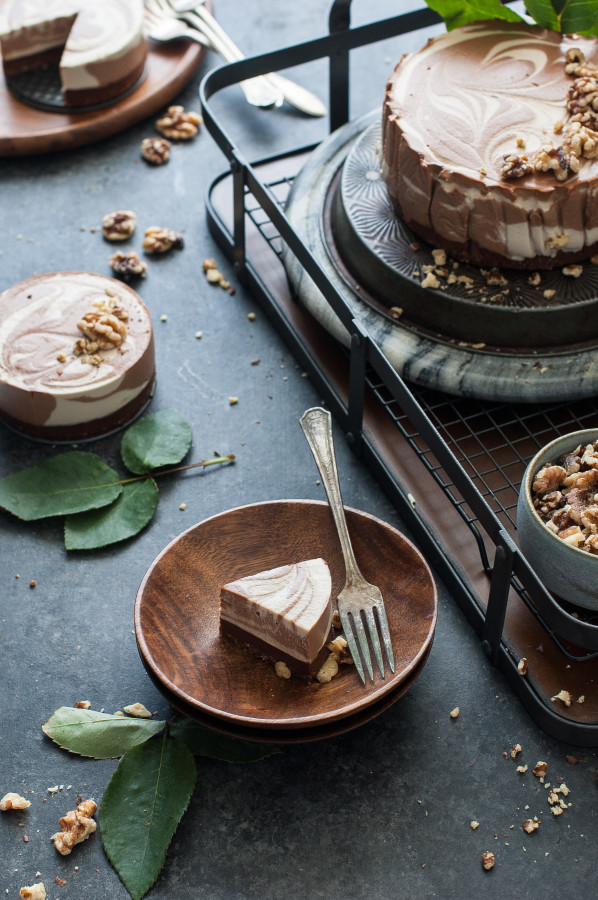 Take this cheesecake, for instance. It’s made with nothing but nourishing, plant-based ingredients with a little bit of organic maple syrup to sweeten. But it looks so decadent and rich that, be honest, would you really think it was made with such ingredients by looking at it?

I brought this cheesecake over on Sunday as my dessert contribution and decided to test that question out. I usually preface the serving of my desserts with a quick explanation of what it’s made of, mostly because I’m so proud of making something so sweet yet nutritious.

But not this time.

I brought my Dad a slice and he said “uh-oh. Well, this definitely isn’t one of your healthy desserts”.

I told him to taste it and tell me.

So he did…..and he still wasn’t sure! So imagine his surprise when I listed off the ingredients. He polished that piece of in a flash and declared these little cheesecakes his ‘new’ favorite dessert. 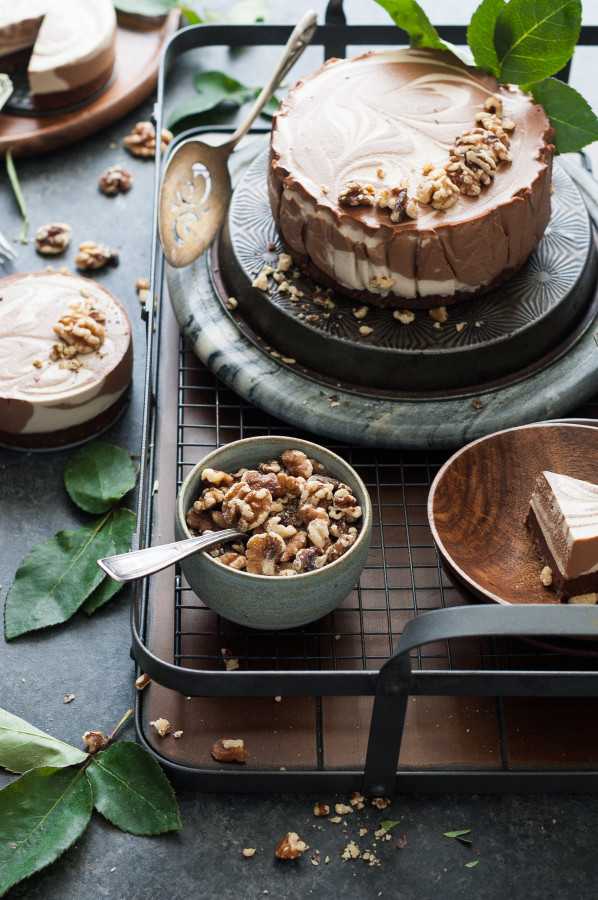 This triple layered cheesecake starts off with a crunchy crust, made of pecans, walnuts, and a few dates. You could use all walnuts or all pecans, but I like the mix of the two so that you don’t have an overwhelming flavor from one or the other.

The next layer is a rich, dense ganache, made with chocolate, coconut oil, raw cacao powder, and coconut milk.

The top layer is the ‘cheesecake’, and is made by soaking cashews and then blending them with a little maple syrup, coconut butter, and vanilla. The mixture is then separated and what remains in the blender has raw cacao powder added to it to make a the chocolate portion of the swirl.

The freezer makes fast work of assembling this cheesecake, but you could chill each layer in the fridge, as well. It will just take a little bit longer to put together. 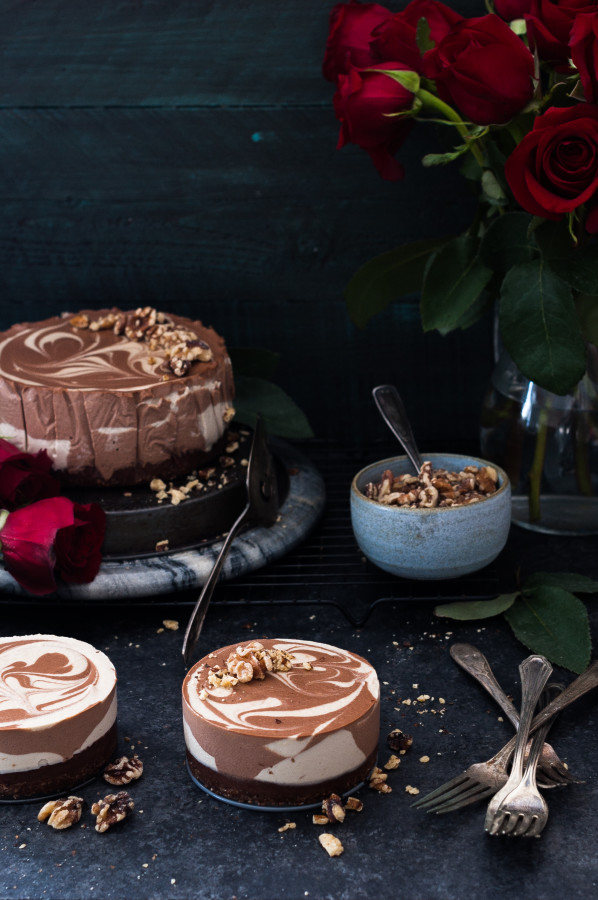 *If you forget to soak your cashews overnight, don’t fret! I do this all the time. I’ll plan on making something that needs soaked cashew and come time to make it, I’ve totally spaced to soak them the night before. For a quick fix, pour hot/warm water over the cashews (enough to cover by an inch) and let them sit for an hour. Drain, and you are in business!

*If you don’t have both types of nuts for the crust, use all of one type. You could even use almonds, if you prefer. I do love the walnut/pecan combo, though.

*When it comes to swirling the chocolate and vanilla batters together, use whatever tool you have handy! This could be a butter knife or a spoon. I, personally, like to make my swirls with a single chopstick. It’s small, thin, and easily reaches the bottom of the pan while keeping the swirls even from top to bottom.

*If you don’t have a springform pan handy, a deep cake pan will work. Since you can’t remove the sides, line the whole pan with a piece of parchment paper before you press the nut crust in. You can do this by cutting out a circle of parchment paper that has the circumference of both sides and the bottom of your pan, plus about two inches, to be safe. You’ll need to press the sides in and flatten them as best you can. Make sure there is at least an inch of parchment paper sticking out of the top all the way around so that you can easily pull the whole cheesecake out of the pan when it’s set. Then you can peel the paper off of the sides and slice! The large cheesecake in the pictures was done using this method. Not as pretty, but it works in a pinch when your springform pans magically disappear (where are all of my pans!?! I almost feel the need to hire a private investigator). 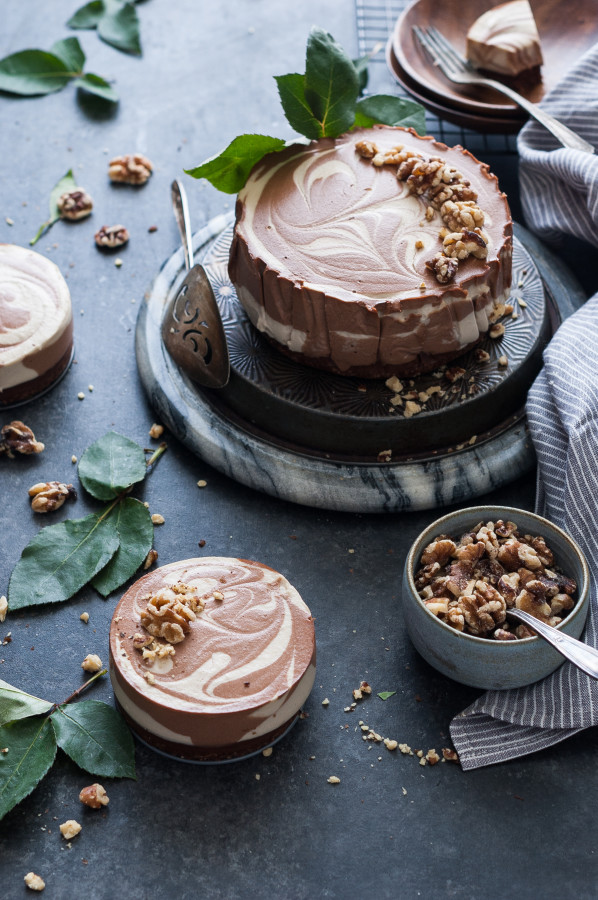 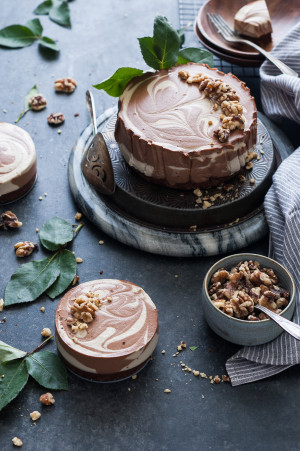 Print
Makes one 9" cake, or several small cakes. This cake is rich so it can go a long way! Store in the freezer as it will become to soft at room temperature to manage. It can be stored in the fridge, if desired, but will not keep as long.
Serves: Makes one 9" cake
Ingredients
Instructions
3.2.2925